The COVID-19 Pandemic has had a major impact on global logistics operations and has resulted in delayed bookings for vehicles.

Despite this, BE FORWARD continues to do its best to get your car shipped as quickly as possible by working closely with the shipping companies.

We apologise for any inconvenience caused and appreciate your understanding. Please do not hesitate to contact our sales representatives if you have any questions.

We are accepting orders, and our delivery service is still available.

Also, please be informed that our Sales staff will be working from home until further notice.

For general inquiries, please see our FAQs Page or fill up our Inquiry Form.

You may also Contact our Japan Sales via WhatsApp or Skype.

Motors.co.uk Limited (FRN 922774) is an Appointed Representative of Consumer Credit Compliance Limited who are authorised and regulated by the Financial Conduct Authority (FRN 631736).

Originally produced only as a five-door hatchback in 1997, the second generation W169 introduced a three-door hatchback. In the markets where the A-Class is or has been sold, it has represented the entry level model for Mercedes-Benz. Having grown by 68 cm (27 in) since the original model, the 2012 third generation A-class was longer than the first-generation B-class. And although sometimes referred to by fans as the 'Baby Benz', Mercedes themselves actually use that moniker for the 1982 Mercedes 190 (W201), their first compact executive car model.[3]

In 1994, Mercedes-Benz confirmed that it would be launching a compact car - the A-Class (A 160) - by early 1997, which would be the company's first venture in this sector of the market; it was hinted at this stage that the new car would be shorter than the average supermini but as spacious and practical inside as a large family car.[4]

The A-Class was first revealed to the motoring press late in 1996, and finally launched at the Frankfurt Motor Show in the autumn of 1997, the W168 A-Class was quite unusual for Mercedes-Benz featuring a front-wheel drive layout and unusual tall but yet short body.

This was the first complete exterior designed by Coventry University trained Steve Mattin, for which he was named Autocar magazine's 'Designer of the Year'. Earlier, Mattin had mostly worked on design for the W210 E-Class in 1991. Concurrent to the W168, he designed the exterior of the W220 S-Class. The final design freeze occurred in January 1995, at 32 months before August 1997 start of production.[5][6]

The W168 became infamous in 1997 after flipping over during the traditional "elk test"[7] performed by the Swedish automobile publication Teknikens Värld. According to the report, the W168 overturned when manoeuvring to avoid the "elk". Mercedes initially denied the problem, but then took the surprising step of recalling all units sold to date (2,600) and suspending sales for three months until the problem was solved by adding electronic stability control and modifying the suspension.[8] The company spent DM 2.5 billion in developing the car, with a further DM 300 million to fix it.[9]

The A-Class was facelifted in 2001, with minor alterations to the headlights, front and rear bumper design and the addition of a new 170 mm (6.7 in) longer wheelbase version. It was launched at the Geneva Motor Show.[11]

DaimlerChrysler invested EUR 900 million in developing the Rastatt plant where the A-Class is produced, and created 1600 new jobs (for a total of 4700). A further 600 people work in the office building at the plant site.

Mercedes-Benz began W168 production on 17 February 1999 at its new Brazilian facility in Juiz de Fora, Minas Gerais. The Brazilian plant was the company's first factory in South America dedicated to passenger cars, with an investment of US$840 million and 10,000 employees. The factory initially produced A-Class and C-Class models, assembling them from pieces manufactured in Germany. The target for the cars was regional markets (from Argentina to Mexico) with modifications made to the cars to suit local conditions, like a protection for the motor base. On 15 August 2005 the factory stopped production of A-Class cars. 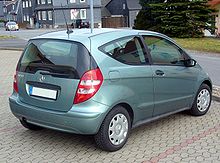 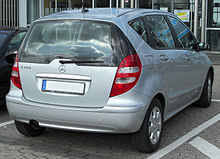 The W169 is constructed with high-strength steel alloys with bonded joints. Standard equipment included front as well as combined head and thorax-protection side airbags. The front airbags are adaptive with two-stage gas generators operating according to the severity of accident. Optionally rear side airbags (for side-impacts in the backseats) and side-curtain airbags were available.

The force exerted by the seat belt system during a collision adapts dynamically to collision characteristics. The 'active' head restraints (standard for driver and front passenger) reduce neck injury, especially in rear collisions.

Seven four-cylinder engines were available: four petrol (gasoline) (A 150, A 170, A 200, A 200 Turbo) and three diesel (A 160 CDI, A 180 CDI, A 200 CDI) partnered with either five- or six-speed manual gearbox. A continuously variable transmission system called "Autotronic Constantly Variable Transmission" (CVT) is an optional feature.

The most powerful engine achieved 0-100 km/h (62 mph) in 8.0 seconds with a top speed of 218 km/h (135 mph). The newly developed direct-injection CDI diesel units use a common-rail direct injection system that improves fuel consumption and reduces exhaust emissions and engine noise.

All the engines meet the tight EU4 emissions limits. A particulate filter system is available as an option for the diesel units to reduce particulate emissions by about 99% without the need for additives.

The A-Class is a front wheel drive car and features traction control (ASR) as standard, as well as electronic stability control and anti-lock brakes (ABS).

Handling is improved by precision tracking and anti-roll support, and by a Parabolic Rear Axle.

A "Selective Damping System", in which the shock absorber forces respond differently according to conditions, is standard. For example, under normal conditions it operates at soft absorption; while cornering at speed it changes to full damping force.

Sales of the W169 were targeted at 50,000 units in 2004. Dr. Joachim Schmidt, Executive Vice President Sales and Marketing, Mercedes Car Group, said that target had been reached even before vehicles arrived in dealer showrooms.[citation needed]

In 2007, the A-Class F-Cell were delivered to Landsvirkjun and Reykjavik Energy.[19] 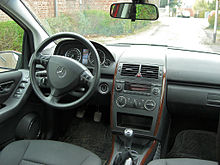 The W169 Model facelift changes included redesigned front and rear fascias and lights, and optional stop-start function on A 150 and 170 models.[21] Active Park Assist enables the car to parallel park itself, with only throttle and brake inputs required from the driver.

Tesla Motors, as part of its collaboration with Mercedes-Benz, built electric powertrain components for the E-Cell. The 36 kWh battery contains approximately 4,000 individual lithium-ion cells.[27][30][31] Mercedes has developed a modular system for electric vehicles with battery and fuel-cell. This system allows the efficient use of shared parts in all the brand's electric vehicles. Thanks to the modular approach the electric drive of the A‑Class E‑Cell is also used in the B‑Class F‑Cell, and the energy storage units in the A‑Class EV are the same as the battery in the Smart fortwo electric drive.[27][29]

A limited production of 500 A-Class E-Cell electric cars will be built, for trial purposes, at the Mercedes Rastatt plant, near Stuttgart beginning in September 2010. As part of a demonstration program, the cars will be leased to selected customers in several European countries, including Germany, France, and the Netherlands. Daimler is not planning to sell the electric version outside Europe.[27][29][32]

The third generation of A-Class was based on the 2011 Concept A-Class and was unveiled at the 2012 Geneva Motor Show.[38] It has an entirely different design, and larger than the previous two generations of the A-Class, with a total length of 4,292 mm (169.0 in), making it a fully-fledged small family car for the first time.

The vehicles were available in some markets from September 2012. Japan models went on sale in January 2013.

The third generation A-Class is designed to be a direct competitor of the BMW 1 Series and Audi A3. It is intended to be more dynamic than its predecessor and is focused on younger owners.

The Concept A-Class is a 3-door concept car that previewed the design of the third generation A-Class and was unveiled at the 2011 New York Auto Show.[39]

Designed for the German RoadSense programme, the basic driving school package includes adaptation of the cockpit to accommodate the twin sets of pedals, a control switch in the centre console for driver's footwell illumination and warning signal for the twin sets of pedals, twin rearview mirrors, the Light and Sight package and the Seat Comfort package. The package is also part of the special A-Class "toBE" model, with deliveries from January 2013.[40]

The vehicle was originally announced to be unveiled in the first quarter of 2013,[42] but was later unveiled at the Geneva Motor Show. The sales release date was set for 8 April 2013, with Germany marketing beginning in June 2013.[43]

The A-Class is powered by a range of 4-cylinder petrol and diesel engines, with the 1.5 diesel engines being versions of a Renault unit.[44][45]

Mercedes-Benz Sport products were produced for the A-Class (W 176) vehicles.[51]

Mercedes-Benz Japan had created a short anime titled "Next A-Class", ahead of the A-Class launch in Japan.[53]

Production of the A-Class began at the Mercedes-Benz Rastatt plant in 2012.[54]

Mercedes-Benz signed an agreement with the Finnish supplier Valmet Automotive to expand A-Class vehicle production, where Valmet will produce more than 100,000 units for Daimler from 2013 through 2016, the agreement was later continued to cover the rest of the production time of the third version which came to an end when production of the fourth version began in 2018. In 2017 Mercedes-Benz signed a new agreement with the Finnish supplier for the fourth version.[55][56]

The W177 Mercedes-Benz A-Class is the fourth and current generation of the A-Class range of subcompact executivehatchbacks. It was launched in 2018 as the successor to the W176 Mercedes-Benz A-Class and sales commenced in March 2018.[57] It is available as a 5-door hatchback (W177 model code), 4-door sedan (V177),[58] and a long-wheelbase sedan exclusive to China (Z177).[59] In North America, the hatchback is available in Canada and Mexico, but in the US, only the sedan is available.

The fourth generation A-Class hatchback was unveiled to media in February 2018 in Amsterdam ahead of its public debut at the 2018 Geneva Motor Show.[60] At launch Mercedes-Benz revealed the vehicle's "predator face", which is also implemented in the C257 CLS and C118 CLA, will not spread throughout the brand's entire range of cars.[61]

Since its launch in autumn 1997, the Mercedes-Benz A-Class has won over a total of some 1.35 million customers. Equipment and appointments for the "Polar Star" special edition include distinctive light-alloy wheels, special paint finishes and a selection of new fabrics and trim elements.

The "Polar Star" special edition sees Mercedes-Benz satisfying the wishes of many of its A-Class customers by including attractive accessories from the optional extras list as standard. In addition, the Stuttgart-based brand has further enhanced the visual appeal of the trend-setting compact car. There are three lines to choose from: CLASSIC, ELEGANCE or AVANTGARDE.

The new special edition is available in Saloon or Coupé guise and comes with a choice of three diesel engines (82 hp to 140 hp) and four petrol engines (95 hp to 193 hp).

Thanks to the unique sandwich concept, the new special-edition model delivers the same outstanding benefits as the rest of the A-Class range, such as renowned Mercedes occupant safety, exemplary economy of space and exceptional variability. The interior space, for example, can be extended up to a length of 2.75 metres whilst the load capacity can be increased to 1995 litres.

Furthermore, the A-Class sets new standards in terms of active safety and roadholding by virtue of innovations such as the parabolic rear axle with precise wheel location and excellent anti-roll control when cornering, not to mention a unique damping system which adapts the shock absorber response to the current driving situation, thus combining a high degree of ride comfort with dynamic handling.

Highlights of the "Polar Star" special edition include:

Alina Joined the Topspeed.com team in the early 2000s as one of the outlets very first experts, and she’s been with Topspeed.com ever since. Over the years, she’s served various roles, but today she’s is relied on heavily to verify automotive facts, assist with formatting, and discover new and engaging topics.  Read full bio