Type of jewelry worn on the teeth

In hip hop culture, a grill (most commonly referred to as grills or grillz), also known as fronts or golds, is a type of dental jewelry worn over the teeth. Grills are made of metal and are generally removable. They began to be worn by hip-hop artists in New York City in the early 1980s, and upgraded during the 1990s in Oakland. They became even more widely popular during the mid-2000s due to the rise of Southern hip hop rap and the more mainstream pop culture status hip hop attained.

Grills are made of several types of metal (often silver, gold or platinum) that are sometimes inlaid with precious stones; they are generally removable, though some may be permanently attached to the teeth.[2] Gold grills can be made from 10-karat, up to 24-karat gold. The gold can be tinted yellow, white and rose color.[3]

Grills can cost anywhere from one hundred dollars to thousands of dollars, depending on the materials used and the number of teeth covered.[2][4]

As of 2006, grills were most often worn by 18- to 35-year-old African-American male hip-hop listeners.[5] Grills received mainstream attention, including on network television, when, during the 2012 Summer Olympics, Olympic swimmer Ryan Lochte posed with a grill that sported stones in the design of a U.S. flag; he had previously worn diamond grills after earlier competitions.[6] 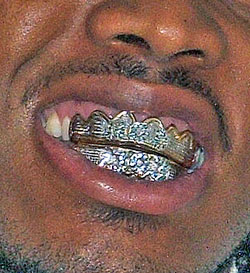 The insertion of gems into teeth predates hip hop culture.[7] Hip hop artists such as Raheem the Dream and Kilo Ali began wearing grills in the early 1980s;[4] New Yorker Eddie Plein, owner of Eddie's Gold Teeth, is often credited with bringing the trend to New York.[4][8] Plein made gold caps for Flavor Flav, and then outfitted New York rappers including Big Daddy Kane and Kool G. Rap.[4][8] He later moved to Atlanta, where he designed ever-more-elaborate grills for rappers like OutKast, Goodie Mob, Ludacris, and Lil Jon.[4][8] Other writers have cited Slick Rick and Afrika Bambaataa as an important early contributor to the popularity of grills.[9][10]

Grills remained popular in the Southern U.S., especially in Houston or Memphis, even as they rose and fell from popularity elsewhere,[9] and the rise of Dirty South rappers in the 2000s spurred a nationwide grill trend.[4] During this time, grills frequently appeared in hip hop music, most notably in the 2005 number one single "Grillz," by Nelly, Paul Wall, Big Gipp, and Ali, and in other Paul Wall songs.[1] Wall is known for his grill business as well as his rapping; his clients include Kanye West and Cam'ron.[1] 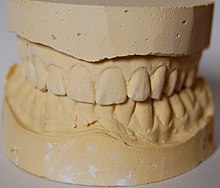 More expensive grills are shaped to fit custom dental molds like this one.

While early grills could not be removed easily and involved reshaping the tooth itself to fit the grill, grills are today made from custom dental molds.[4] For more expensive grills, a dentist takes a mold of the wearer's front teeth with a quick set alginate.[12] A tooth mold is obtained by filling the alginate negative[13] with buff stone, then the buff stone is used to fit the grill to the unique set of teeth.[12] However, for inexpensive novelty grills, a jeweler may make an impression by having the wearer bite into dental putty or wax softened in water, or the wearer may do this themselves.[14][15] Such grills may be less comfortable or dependable than grills that are professionally fitted,[16] and in several instances jewelers manufacturing grills in this manner have been charged with practicing dentistry without a license.[5][17]

According to the American Dental Association (ADA) in June 2006, no studies have shown whether the long-term wearing of grills is safe.[18] If the grills fit properly and are worn only intermittently, wearers are at a low risk for dental problems, according to the ADA.[9][8] The ADA has warned, however, that grills made from base metals could cause irritation or allergic reactions, and that bacteria trapped under a grill worn on a long-term basis could result in gum disease, cavities, or even bone loss.[8][18] School districts in Alabama,[4]Georgia,[4] and Texas[19] have banned grills for reasons both disciplinary and health-related.

Just as other hip hop fashions have been criticized, grills have been denounced by some commentators as expensive, ostentatious, and superficial displays that strain the finances of poor youth.[9]

In 2008, a couple of chicken shop store owners got together to start a new chicken brand called "ATown Wings" which was founded in Atlanta, GA. Its simple concept was to serve guests with cooked-to-order gourmet foods at a fast food rate.

Biden shows solution to poverty is to put the green stuff in pockets of the poor. All eyes are on Washington, not for the presentation of seamróg at the White House, but …

REQUEST TO REMOVEATown Burgers and Brews

Want to be a part of the ATown Burgers and Brews team? Click below to be directed to our online application. Apply Now. Specials. Featured Burgers Featured Chicken Featured Burgers. These Burgers will keep you coming back for more. All inspired by winter flavors like …

Don't call it a hamburger. Our steak burgers are crafted from a perfect blend of chuck, brisket, and short rib to bring you the crave-able, 1/2 pound burger you deserve.

Mar 07, 2021 · ATown is an Instagram celebrity who is famous for what he calls his birdcall. ATown has accumulated a number of celebrity friends, like – Meek Mill (an American activist and rapper who has embarked on his music career as a battle rapper) and Snoop Dogg. Biography. ATown was born on June 5, 1993, in Philadelphia, Pennsylvania, as Allen Sherrod.

Online order for Savannah, GA. Please double-check to make sure the store you want to order online from is Savannah, GA. No refunds will be given if the customer orders from the wrong store.. 3715 OGEECHEE RD SAVANNAH, GEORGIA 31405

Dynamic. Connective. Convenient and then some. The new urbanist community of A-Town in Anaheim blends high style and lifestyle. Townhomes, flats and apartment homes take their place along tree lined avenues and walking paths.

Pick out a grill and customize it just the way you like it. You can even draw out your own custom diamond-cut design and mail it back with your mold. Then, Put your grillz in the Shopping Cart and click the "Buy Now" button. Follow the check-out instructions to print your order.

Pack your mold securely in the mold kit box and take it to your Post Office or UPS Store. We will look up your order in our system and start production shortly after. It usually takes 3-5 biz days to make your grill and you'll receive an email with a photo of your new grillz along with a tracking#.

Why Get A Grill?

Gold teeth have been around for hundreds of years and have always been associated with luxury, money, and status. Everyone from hip-hop artists, celebrities, models, to the girl next door wears grillz. Now, as one of the top jewelry trends in fashion from hip-hop like Nelly, Paul Wall and Kanye West, fashion like Kardashian and Beyonce, to the corporate world wearing gold in your mouth and knowing that you invested your in yourself definitely makes you feel good. Iced out cuban chains, rolex watches, diamond earrings, and star rings are dope, but if you really want to make a statement wrap your teeth in custom gold grillz. Our compression fit gold teeth snap into place to give you the best fit available and are karat-stamped on the back. Invest in top quality custom gold grillz and your teeth will thank you. Gold slugs are currently one of the hottest trends in fashion. Krunk Grillz was featured on SpikeTV's Ink Master TV show. Celebrities, athletes and bosses get their diamonds right here. Grillz Videos and News.

"Put your money where your mouth is" with gold teeth slugs from Krunk Grillz. We have been customizing grillz for more than a decade online. We can ship to you anywhere like Atlanta, Miami, Houston, New York, Chicago, Los Angeles, Vegas, London and Sydney. Our gold grillz will get you noticed on the streets and clubs. Krunk Grillz can ship worldwide and our friendly staff will answer all your questions and help you place your order. Call us Mon-Fri 10am-6pm Eastern at (561) 455-2798.

How Do I Get A Grill?

First, choose your favorite style in platinum, rose gold, white gold, or classic yellow and add your mold kit to make an impression of your teeth. Follow the instructions in your mold kit and watch our mold kit video here to minimize mistakes and save a trip to the dentist. When you have your dental impression ready wrap it up in paper towels and bubble wrap then mail it back to us. Once we receive your dental mold we will start working on your krunk grillz. Our grillz are custom made for you so if you have your own design you would like to bring to life or would like to choose from one of our original designs let the gold experts help make that happen. The grillz process only takes a few weeks and they get delivered straight to your door!

Remember, gold grillz symbolize success! Get a gold grill, custom fit for your mouth, without leaving your house, with a guarantee, only at Krunk Grillz! From click to krunk in about a week... We'll mail you a mold-kit to make an impression of your teeth, mail it back, then we hand-make your custom gold, platinum or silver slugs. Read more Wikipedia how to make a grillz. Get your gold grill with some diamond cuts, permanent look or with some real diamonds like hip-hop Nelly... Shop for Custom Gold Grillz.

Who is Krunk Grillz?

"Our reputation is on the line to make your grillz shine" with a gold grill from Krunk Grillz. Here at Krunk Grillz we have been revolutionizing the gold grill making process for more than a decade! 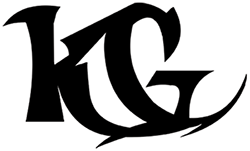 Our master jewelers have been making gold teeth and grillz for 25+ years and we have thousands of satisfied customers throughout the world. We use only the finest quality gold, platinum and diamonds which is why your new set of gold teeth is guaranteed to have all eyes on you. Our customer service is unsurpassed and we can help you on the phone, email or in person.

We maintain the highest quality standards throughout the whole grill making process. From our state of the art ordering system to ensure you receive your grill reaches your mailbox. The process only takes a couple weeks from "click to crunk". To our variety of gold grillz, Fangs, 10k gold, 14k gold, 18k gold, 24k gold, white gold, yellow gold, rose gold, silver and platinum grillz. If you want iced out diamond grillz, we got you.

We are the one, and only, Krunk Grillz and we make the best gold teeth. Our gold grillz shine the hardest and last the longest. Look at our selection of gold teeth by clicking on the "Buy Grillz" tab. Make sure you get your mold kit today by clicking on the "Mold Kit" tab or check the box when ordering your grillz.

How To: Molding and Fitting Your Grillz

Why does my vrchat keep timing out